2014 is off to a rip-roaring start as we gear up to premiere Afterparty in the town we call home, our beloved Vancouver. When I first moved to Vancouver 7 years ago (how time flies!) I volunteered for the WITFV festival as a way to get to know some of the local filmmaking talent in the city. It was an amazing and inspiring experience; so many great films! Flash forward 7 years & it is a great honour to be part of this festival. We hope you can make it out!!

Here are the details in a nutshell:

As added bonuses the award-winning short film (a Sociable Co-Pro) When I Saw You will also be screening at the Festival as part of their Date Night Program on March 7th @ 9:00 PM & The Canadian Screen Award nominated web-series The True Heroines (which I direct, Nick writes and produces & Ali stars in) will be part of the Web Series Lounge on Sunday March 9th.

For more information about the 9th ANNUAL VANCOUVER INTERNATIONAL WOMEN IN FILM FESTIVAL and tickets to AFTERPARTY & WHEN I SAW YOU click here.

Also, here are a few shots from The Elle Canada Photo Booth as part of #WFF13. These wonderful people will be attending our #WIFTV screening next month. 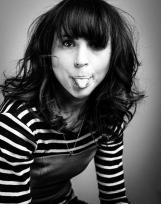 The March 2014 Elle Canada is available on newsstands now!

ICYMI – our trailer!!  We love the music composed by Darcy Rego & Jay Nunes of The Meligrove Band. You guys rock!